It’s been a while since I attended a concert of the Maine Music Society under music director John Corrie. If the performance of the Bach Brandenburg Concertos at the The Franco Center on Saturday is any indication, the chamber orchestra has become one of the jewels in Maine’s classical music crown.

Concertmaster Dean Stein, formerly of the DaPonte String Quartet, has aided in the transformation. All of the musicians, however, were outstanding, solo or as members of the chamber orchestra.

Each of the innovative concertos, except for No. 1, which was omitted because of time constraints, was well thought-out and executed, but Corrie saved the most spectacular, No. 2 for trumpet and No. 5 for harpsichord, for last. Technically both soloists are members of a concertino of three instruments, but the other two are mainly along for the ride.

In every recorded performance that I have heard of the Concerto No. 2 in F Major (BWV 1047), the trumpet part is labored and full of wrong notes, as if the score were so difficult and so high-pitched that it was an accomplishment merely to get through it. The playing of Trent Austin, a noted jazz trumpeter from Boston, came as a revelation. So that was what Bach intended! Fluent, pitch-perfect and sweet, while still managing to blend in with the ensemble. It was one of the few recent performances that really deserved its standing ovation. The oboe part was also very well rendered by Kathleen McNerney.

Corrie’s harpsichord playing in the Concerto No. 5 in D Major (BWV 1050) was almost as impressive, but in a more intimate way. One could wish that the society had a larger instrument – harpsichord volume is independent of the performer – but the unaccompanied parts amply repaid close listening. It seemed, in the new auditorium of the The Franco Center at least, that once the harpsichord had distinguished itself in these virtuoso passages, it was easier to hear among the rest of the orchestra.

The program began with the Concerto No. 3 in G Major (BWV 1048), which lacks both a concertino and a slow movement (well, two measures) but is nevertheless delightful, followed by No. 6 in B-flat Major (BWV 1051), which has no violin part. The latter, which is written entirely for viola, viola de gamba (now played by the cello) and continuo, was the least successful of the group, seeming to lack a rhythmical center in the first few measures.

The first half of the program concluded with one of my favorites, Concerto No. 4 in G Major (BWV 1049), with a concertino of violin, played by Stein, and two flutes (formerly recorders) played by Krysia Tripp and Nicole Rabata. The brilliantly light-hearted work concludes with one of Bach’s signature fugues, showing that this academic form can also be quite cheerful.

Will Hertz’s fine program notes include an embarrassingly servile dedication of the concertos to the Margrave of Brandenburg, who never responded. Fortunately, Bach didn’t really mean it anyway, since the concertos seem to have been re-writes of previously performed material.

Christopher Hyde’s Classical Beat column appears in the Maine Sunday Telegram. He can be reached at: classbeat@netscape.net

“Had a great time at the FAHC on Saturday evening. Wow! What a fabulous job the refitting of St. Mary’s is! I was absolutely stunned at the magnificent auditorium that has been created. And, the music, oh my God, the music. Absolutely exquisite! Maybe due in part to the acoustical excellence of the hall, but the playing was nearly flawless, the dynamics and musicianship were breathtaking. I can honestly say that I haven’t heard the Bach Brandenburg’s played with this much sensitivity and creative aplomb in decades. You have a genuine gem with this hall as the home of your program and the Maine Music Society . Kudos to all involved.” — Roland

An English Holiday Sunday, December 9, 2007 The Franco Center in Lewiston 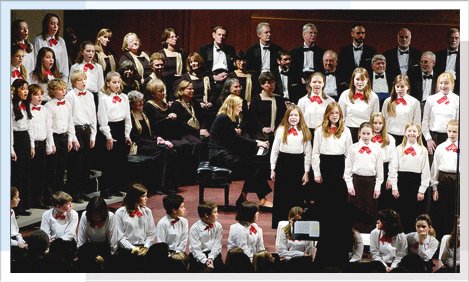 In the nanoseconds after their voices fell silent on Saturday, the singers of Brahms’ “German Requiem” inside Saints Peter and Paul’s Basilica in Lewiston faced a stunned audience, until one man cried out a tremendous “Bravo!”

His outburst unleashed a cavalcade of worthy applause, as the crowded basilica had been treated to a remarkable cultural display, one which highlighted the talent prevalent in Lewiston-Auburn from the united voices of Lewiston and Edward Little high schools, Bates College and the Androscoggin Chorale.

They meshed beautifully, and L-A should eagerly await their next collaboration.

A Celebration of Spring: Vivaldi Gloria and other Songs of Joy

The Androscoggin Chorale, conducted by John Corrie, gave a warm and pleasant welcome to spring Sunday afternoon before a large audience at Lewiston-Auburn’s The Franco Center. The concert was also a lesson in the virtue of simplicity.

The most moving work on the program was a simple harmonic setting of Robert Burns’ “My Love Is Like a Red, Red Rose,” by contemporary American composer James Mulholland. The settings of Robert Bridges poems by Gerald Finzi were also well done with “Clear and Gentle Stream” capturing the pleasant, flowing melancholy of the verses.

As usual, Cole Porter came out on top among popular American composers in a nice Latin-flavored arrangement of “In the Still of the Night”. George Gershwin’s great “Summertime” didn’t have a chance, in an arrangement that dragged and ended in an up-and-down siren wail that set a new low in gussied-up choral awfulness.

The Rogers and Hart “My Romance” also suffered from an overly fancy arrangement, but included a good, understated duet by Karen Chapman and Rick Rau.

Aside from the Cole Porter tune, the liveliest and most enjoyable selection was Rogers and Hammerstein’s “It’s a Grand Night for Singing.”, in rapid waltz tempo. It should be noted that all of the American works were sung by the chorale with skill and enthusiasm, no matter who wrote the arrangements.

The first half of the program was devoted to the Vivaldi “Gloria in D”, a long but cheerful work whose performance had both high and low points.

The chorale seemed more at home with the more straightforward “The Heavens are Telling” from Haydn’s oratorio “The Creation”. Corrie emphasized the unusual instrumental hiatus in this movement, which spotlights the soloists in a way that Beethoven appropriated in the Ninth Symphony. All of the accompanied works on the program relied on the considerable talents of pianist Bridget Convey.

Particularly impressive were the a cappella madrigals by Purcell and Morley. Except for some minor miscues in the rapid “fa la la” section of the Purcell, the intricate part-singing was much clearer than is usual in arrangements for large chorus. The bass section, however, still needs a little strengthening.

The program ended with a Fantasy on “America the Beautiful” by Maurice C. Whitney that earned a standing ovation in spite of being a little overblown.

One wonders how many audience members had also heard the satirical Joan Tower deconstruction of the same song played at the center just a couple of weeks ago by the Midcoast Symphony Orchestra. The difference was rather striking.